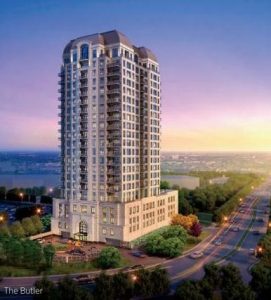 Just as there were differences of opinions expressed by residents, Lalmalani was forced to cast the deciding vote because of a 3-3 deadlock among board members.

John Baar, Philip Cuevas and Ed Tiesenga voted against allowing the development, and Asif Yusuf, Moin Sayed and Michael Manzo voted in favor of it.

“I truly believe the village of Oak Brook is at a crossroads for the first time in its history,” Lalmalani said. “We can do nothing and be at a standstill, or we can do something and move forward.”

Lalmalani said he understood the opposition to the development, which was recommended for approval by the village’s Planned Development Commission, but believes the positives for Oak Brook outweigh possible negatives.

Some of the opposition was from residents who believe the development will have a negative impact on nearby property values, and some expressed concern about possible flooding problems.

“I believe this development will help to increase the property values in that area,” Lalmalani said.

Pricing of the smallest units is expected to start in the mid-$800,000s, with the largest, non-penthouse units being just over $2 million.

Lalmalani also said federal, state and county authorities will have to sign off on the project meeting standards for flooding control before construction is allowed.

Yusuf said the development actually would improve flooding issues because of additional water storage space that is included in plans.

Baar said he was not against development, but doesn’t believe this is the right project for the location.

“When it was proposed, I though it was a very exciting project,” he said. “As much as I admire the building, it doesn’t go with the character of this area of Oak Brook.”

Former Village Board member Gerald Wolin, who lives at the nearby Oak Brook Club condominiums, agreed with Baar’s take.

“Twenty-two stories is totally inappropriate for that location,” he said. “It’s out of character for the neighborhood.”

Wolin also expressed concerns that the lot is too small, resulting in approved building setbacks less than usual, and that the additional residents will require a significant expenditure by the village for its services.

Another resident, Ed Mullins, spoke in support of the development.

“It’s modern and beautiful,” he said.

Along with the condominium units, the development will have 225 indoor parking spaces, a health club, several communal spaces, landscaping, an exterior dog run and surface parking.