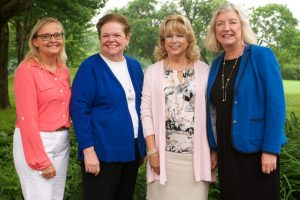 DuPagePads was one of 36 not-for-profit organizations to receive a grant at the DuPage Foundation’s Spring Grant Awards Breakfast held on Tuesday, June 12, at Glen Oak Country Club in Glen Ellyn. The DuPage Foundation awarded more than $500,000 in grants to organizations working in the area of Health and Human Services. The grant received will help underwrite DuPagePadsFamily Outreach program.

“Once children who were homeless obtain a place to call ‘home,’ their health improves and they can focus in school and excel in their studies. DuPagePads Family Outreach program keeps families engaged in comprehensive support services so that they can overcome their challenges to housing and ultimately work toward their full potential,” says Carol Simler, DuPagePads President & CEO.

DuPage Foundation’s grant funding for DuPagePads Family Outreach program ensures participants have access to stabilizing support services including obtaining mainstream benefits, healthcare and employment training. Additionally, DuPagePads case managers advocate for children within local school districts. The Family Outreach program aims to serve over 120 individuals in 40 families, with more than half of those served being 17 years old or younger. The program estimates that 60% will obtain stable housing; and 40% of the families served will obtain stable housing in six months or less.

With over 32 years of service, DuPagePads has become the largest provider of services to those who are homeless in DuPage County. DuPagePads’ mission is to end homelessness in DuPage County through the solution housing, coupled with support services and employment. Last year the agency served 1,233 people, with 72% listing their last address in DuPage County. Of those served, DuPagePads assisted 383 people in obtaining stable housing. The administration office is located at 601 West Liberty, Wheaton, IL 60187. Additional information can be obtained by contacting DuPagePads at 630.682.3846 or at www.dupagepads.org.

DuPage Foundation staff and grant committee members received 53 applications and are proud to say 68% of the projects submitted this spring were funded. DuPage Foundation Vice President for Programs Barb Szczepaniak explained, “It is because of donors who have given unrestricted gifts or established field of interest funds that our Community Needs Grant Program exists. And it is because of donors with individual donor-advised funds that we can supplement the original program and award even more organizations their grant requests. This wonderful teamwork results in support for so many worthy causes!”

Communication is the Key to Great Client Relationships

Chamber member Xeno Media is proud to be recognized for their commitment to their clients! They are now featured on Clutch.co with an overall 5-star rating from their clients and on Clutch’s sister website, The Manifest, as one of the top web developers in Chicago. They work to build strategic relationships, not just accounts. They listen to what their clients want to achieve and produce websites to meet those goals. A running theme to the client reviews has been their commitment and open communication.

In recognition of the 50th Anniversary of the Special Olympics, Oak Brook Polo Club has teamed up with BraveHearts Therapeutic Riding and Educational Center and Special Olympics Illinois to host a celebration fundraiser on Sunday, June 24th at the Prince of Wales Field.  The event will feature an equine demonstration while highlighting a number of Special Olympic athletes and take place prior to the finals of the Drake Challenge Cup between Oak Brook (USA) and Escuela de Polo Mexico (Mexico).

“We are honored to partner with the Special Olympics and BraveHearts, and be among Chicago’s professional sports teams to celebrate this momentous occasion and support the Special Olympics movement,” says Jim Drury, President of the Oak Brook Polo Club. “Equestrian sports and therapy has proven to be a successful method in the treatment of mental and physical challenges, and we are thrilled to showcase this to the public under the backdrop of polo. Join us and celebrate this historical achievement.”

In July 1968, nearly one-thousand athletes with intellectual disabilities from twenty-six states and Canada came together at Soldier Field for the first ever International Special Olympics Games. The event became a significant moment in a worldwide civil-rights movement for children and adults with intellectual disabilities. Now, fifty years later, Chicago will once again host athletes in a variety of competitions and events from July 17-21st at Toyota Park, Soldier Field and Huntington Bank Pavilion at Northerly Island.

“We’re grateful to the Oak Brook Polo Club and BraveHearts for the opportunity to bring recognition to the 50th Anniversary of Special Olympics,” says Dave Breen, President and CEO, Special Olympics Illinois. “We look forward to celebrating the past, present and future of the movement in our home state – one that served as the birthplace of Special Olympics.”

BraveHearts, a nonprofit organization that provides equine-assisted services to children, adults and military veterans, will organize the equestrian demonstration.  They are the largest PATH (Professional Association for Therapeutic Horsemanship) International horse program in the country serving veterans at no cost.   The vison of BraveHearts is to bring hope, joy and unlimited possibilities through the healing power of a horse.

Gates are scheduled to open at 12:30 p.m. with shuttles running to and from the free parking lot at the Drake Oak Brook Hotel (2301 York Road).  The Special Olympics equine demonstration will take place at 1:15 p.m., followed by on-field polo festivities at 2:15 p.m. and polo match at 3:00 p.m.  Equine athletes and horses will be involved in many of the polo festivities including the team parade, national anthems, divot stomp and post-match trophy ceremonies.  Special Olympics volunteers will be onsite during the match collecting donations and helping to run a 50/50 Raffle, which will be preceded with fun raffle giveaways throughout the afternoon before the big draw at the end of the match.

Ticket and event information can be found by visiting www.oakbrookpoloclub.com. Donations to the Special Olympics can be added when purchasing online or onsite in amounts of $5, $10, and $15.