Congratulations to the Chamber’s Vice Chairman Dan Wagner! What an amazing accomplishment! 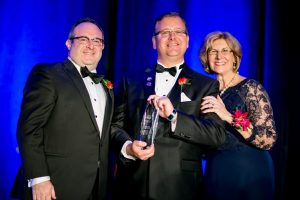 The real estate community gathered at the 134th Annual Inaugural Gala on Monday, October 9, for a beautiful evening at the Radisson Blu Aqua Hotel honoring members of the Chicago REALTOR® family. The event included the installation of the Chicago Association of REALTORS® 2017-2018 Board of Directors, and honored several individuals for their contributions and positive influence on the industry, among which was the recipient of the REALTOR® of the Year award.

Dan Wagner’s vast and forever growing impact on the real estate industry and local community is admired and cherished by his fellow REALTORS®, Chicagoland citizens and colleagues at The Inland Real Estate Group of Companies, Inc. He served as the 2015-2016 President of the Chicago Association of REALTORS®, is the President-Elect of the Illinois REALTORS® and was the National Association of REALTORS®’ 2016 Commercial Liaison. He has been an outspoken advocate for protecting the 1031 Like-Kind Exchange and mortgage interest deduction. Dan possesses a determination to continue to make a positive impact on the real estate industry, year after year.

Dan’s personal advocacy is just as admirable as his professional work. He is the Past Chairman of the Greater Oak Brook Chamber of Commerce, is actively involved with the Village of Oak Brook and is a commissioner on the DuPage Airport Authority. In 2014, he received the Advocacy Award from the Illinois Parks and Recreation Association for his work on behalf of special needs children in his community.

Dan’s passion and integrity bring positive change to every organization he is involved in, and he sets a well-respected standard for the Chicago Association of REALTORS®. We are extremely grateful to have Dan so heavily involved in our association and are incredibly honored to be presenting this award to him this evening.

REALTOR® of the Year 2017: Dan Wagner | Chicago Association of REALTORS®