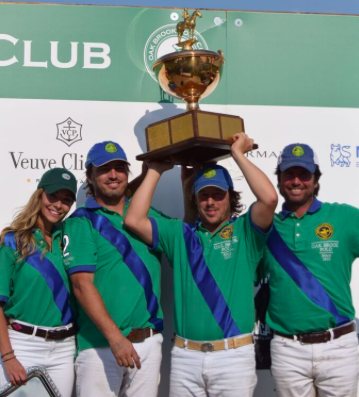 On Sunday, August 6th, Oak Brook Polo Club gave a warm and “kettle drums” welcome to the Kingston Polo Club from Jamaica as they prepared to compete for one of Oak Brook’s oldest (since 1964) and most celebrate trophies –The Drake Challenge Cup.  While the match kicked off the start to the “International Polo Series,” it was also the 55th year of Jamaican Independence Day.

Jamaica started the 4-chukker match with two goals on handicap however the Oak Brook team didn’t waste any time and immediately made up for it and then some by quickly scoring four goals.  The first was by Flanagan, followed by one from Gutierrez. Obregon scored next on an incredible 45 degree cut shot through the north goal and finally Onetto scored the fourth goal for Oak Brook’s lead 4-2.

Oak Brook remained in the driver’s seat for the second chukker shooting in another three quick goals –two in regular running play from Gutierrez and Flanagan and an impressive neck shot goal from Onetto.  Jamaica found a few open opportunities, with Laritirigoyen putting in the first field goal before working with Vangel to feed the ball up to Melville who put one in.  Vangel also got one through the posts after a good ride off against Obregon.  At half-time, Oak Brook held their lead 7-5.

Following the traditional divot stomp, the third chukker began with Oak Brook receiving a penalty 4 which was then converted by Obregon.  Melville, on a horse called “Marley” responded with one of his own, then Vangel and finally Laritirigoyen. In the last 30 seconds of play, Onetto launched a nice 75-yard hit up to a perfectly positioned Flanagan who finished off the last 40 yards with a shot between the posts.  Oak Brook maintained the lead 10-8.

If the fourth chukker had a theme, it would be “hit and run.”  Onetto was the only one to score for Oak Brook while both Melville and Vangel scored one each for Jamaica.  Chambers made a valent attempt to match the score but ran out of time.  The horn sounded and Oak Brook won the 2017 Drake Challenge Cup 11-10.

The “Best Playing Pony” was awarded to the mare, Lili (owned by Onetto), and “MVP” went to Melville of Jamaica.

Oak Brook Polo’s next two matches in the “International Polo Series” are August 20th against India and September 10th against Great Britain.

Founded in 1922 by legendary businessman, Paul Butler, the Oak Brook Polo Club is an American Polo treasure and one of the oldest polo clubs in the United States. It was once the sport’s epicenter for elite professional polo in the United States and served as home to the U.S. Open Polo Championship for twenty-four straight seasons and other prestigious international and national polo tournaments. For decades, the Club has been a popular Sunday tradition and social scene known for entertaining Hollywood celebrities, dignitaries, royalty and Chicago’s distinguished. Today, Oak Brook Polo Club hosts several Sunday matches and continues to attract thousands of fascinated spectators who marvel at the athleticism and majesty of this timeless sport.