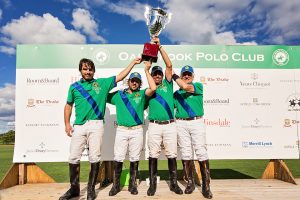 It was an afternoon of notable events at the Prince of Wales Field on Sunday, June 25th as Oak Brook’s Polo team defeated Team Zeralda 14-9 in the Commander’s Cup 12-goal match.  Armed Forces serviceman and veterans were honored in a remake of the Black Horse Troop match, and Samantha Falbe served as team Patron and fielder for Team Zeralda, a rare and unique position for a woman in polo that hasn’t been seen in decades.

The pre-match parade was led by the Culver Academy Mounted Color Guard, which is home to the Black Horse Troop that marched in the 2017 Presidential Inauguration and was followed by a 1945 Harley Davidson military motorcycle, and celebrity guest Kristy Swanson.

After the ceremonial bowl in by Swanson – the match got underway at a quick 12-goal pace. Walton was the first to score for Team Zeralda in regular game time, and then put another on the board on a penalty 4. Not to be outdone, Onetto shot in a quick runaway goal out of the line up just before the horn of the end of the first chukker.

For the start of the 2nd chukker, Zeralda came out strong. Walton put in another two successive goals – one on penalty and one in regular game hustle. Llambias, playing defense for Zeralda in the number 4 spot, did a great job holding the offense of Oak Brook until the second half. Onetto changed to a fresh pony and quickly fired in three quick goals for Oak Brook – one on a penalty 4, and two in regular play. Finding his stride, Onetto scored the next three consecutive goals for Oak Brook to lead 7-5 by the half time point.

As the 4th chukker got underway, Oak Brook’s Gutierrez and Drury were well positioned to pick up the passes being fed from Obregon and Onetto, who both came up through “traffic” a couple of times to score the eighth and ninth goals of the match. Walton scored one for Zeralda to end the  chukker 9-6 to Oak Brook.

As the 5th chukker got underway a timely back shot from Gutierrez was picked up by Obregon who then passed the ball up to a well-positioned Drury just 30 yards from the goal – score now eleven for Oak Brook. A moment later, Zeralda’s Llambias lobbed a nice pass to Falbe who took the ball to goal in front of a cheering crowd.

For the last chukker, Zeralda came out with their best horses and fired in two goals, one from Matias Obregon, and another from Walton. Oak Brook responded with two goals from Onetto and one from Obregon to secure the win.

“Team Zeralda was strong and enthusiastic!” added Falbe. “We had a few missed opportunities and continued to challenge ourselves until the end.