It was a 90+ degree day, however that didn’t stop Oak Brook Polo Club from officially kicking off the 2017 season with a 12-Goal polo match against rival Arranmore on Sunday, June 11th at the Prince of Wales Field in Oak Brook. Captained by John Greene (1), Arranmore defeated Oak Brook 13-11 in a close match with the score difference never more than two goals for either team. Team members included Del Walton (3), Tod Rackley (3) and Maco Llambias (5). 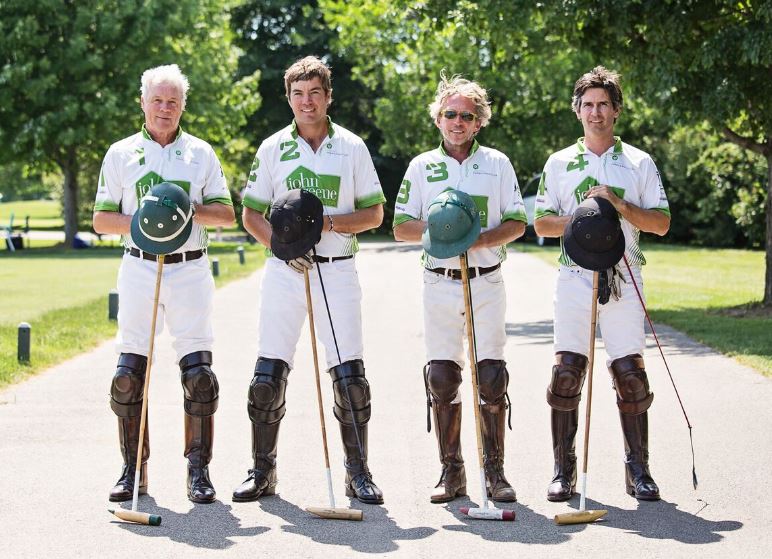 After the ceremonial bowl in, the match was underway and Oak Brook’s Onetto scored the first goal of the afternoon off an open goal penalty 3 shot.  Not too long after, Walton did the same for Arranmore, again on a 3-goal penalty.

Over 400 spectators were in attendance amidst the heat to enjoy a full 6-chukkers of polo in addition to participating in contests such as the Barrington Saddlery’s Mallet Challenge, Best Hat Contest, Polo Trivia and the traditional halftime “Divot Stomp.”  Players ran the ball several times up and down the west and east side of the field to give field-side spectators an understanding of the speed and urgency of a 12-goal polo game.

“Despite the temperature, an enthusiastic crowd came out to enjoy a thrilling match of 12-goal polo, which has not been seen in over a decade at Oak Brook,” explained Drury. “We saw record attendance in our Club and sponsor seating areas and everyone expressed excitement at seeing the new venue configuration and amenities, including elevated stadium seating, Room & Board patio furniture, the Pimm’s Chukker Bar and more.”

The winning goal was shot by Del Walton who had 10 goals total and received MVP honors.  Other high goal scorers include Oak Brook’s Onetto and Obregon who tied with four each.  Best Playing Pony went to “Peacemaker” owned by Onetto.

“Jim Drury and the Oak Brook Sports Core have done an amazing job with the field and bringing it back to where high-goal, competitive tournament polo can be played again,” added Greene.

The Oak Brook Polo team’s home schedule features seven polo matches and includes the return of the “Commander’s Cup” and “Horses & Horsepower” events in addition to the “International Polo Series.”  The team will also be competing in several 8-12 goal competitions and tournaments outside of Oak Brook including matches at Arranmore Farm & Polo Club (Oswego), Morgan Creek (Yorkville), Due West (Chicago), Font Farm (Plano) and other Chicagoland area polo clubs and fields.