Are recruitment problems keeping you up at night?

Are you up at night worrying about how to find skilled candidates for an important technical position at your company? Or are you searching for ways to support those talented young applicants who want to work in Greater Oak Brook, but need assistance with transportation and housing? These are just several of the many issues the Chamber’s Talented Workforce Committee has addressed over the past year.

The Committee has learned about the critical skills gaps local employers are struggling to fill, the changes our State’s educational system is going through and emerging K-12 model curriculum, and how our area higher education institutions are addressing skills gaps and providing remedial support for students as they enter college. The Committee has also worked to identify ways to more effectively link employers with supportive programs at area colleges and universities.

“Too often, employers and higher education institutions must teach and train individuals who are academically, vocationally or otherwise unprepared to be in the workforce,” said Talented Workforce Committee Co-Chair Nora O’Connor. “This puts an unnecessary burden on businesses and universities to help them succeed, and results in additional costs and delayed performance for employers and post-secondary institutions. There must be significant improvement in how K-12 schools educate children so that they are better prepared when they enter college and jobs.”

In addition, the Committee has joined the Economic Development Partnership (EDP) Council and Young Business Leaders group to discuss how to expand housing, social and peer support for young professionals. The EDP has also initiated a new initiative, the STEM Bridge Partnership, which is a youth-led curriculum-based service-learning project that focuses on STEM learning and college and career-readiness for at-risk middle and high school students.

For information about the Talented Workforce Committee or the STEM Bridge Partnership, please contact Tracy Mulqueen at [email protected].

Will students be ready for work?

According to local companies, colleges and universities, too many students and employees are entering college and the workforce unprepared to succeed academically and professionally. In addition to lacking basic oral and written communication skills, many students struggle to meet the minimum math and analytical skills requirements.

Our state’s school test scores clearly indicate that many middle and high school students are performing poorly these areas. This means that colleges and employers continue to be challenged with helping students and new hires develop these skills during their freshman year and on the job, a delayed intervention that often doesn’t ensure student or employee success.

So it’s not surprising that businesses across Illinois are concerned about how the new federal Every Student Succeeds Act (ESSA), formerly No Child Left Behind, will affect the State’s current career-readiness standards in school testing. These standards include use of the Partnership for Assessment of Readiness for College and Careers (PARCC) tests, which have been critical in moving the state toward a truly reliable testing system that prepares students for college and future jobs.

Ben described how the new federal law will continue to support and even expand the State’s existing school improvement efforts by allowing the State to have more authority to set its own standards, assessments, and interventions, while expanding its current support for at-risk, preschool, and homeless students.

Of special interest to businesses is the State’s new eligibility to apply for federal grants to address kindergarten readiness, reading and math improvement, and college readiness and completion. However, the new law also gives states more room to revise some of the previous law’s rigorous learning requirements. That means that businesses must advocate for the State’s continued use of the PARCC assessments. According to national education standards and policy experts, the PARCC tests are now one of the most effective tests for measuring critical student academic and career-readiness preparation.

Are you a young leader ready to take charge?

“These young professionals are already growing and succeeding in their jobs,” said Young Business Leaders Co-Chair Maxine Vazquez. “This program helps them to become more involved in important chamber and community leadership opportunities and offers peer activities to strengthen their professional networks. These young leaders are also recruiting other talented young people to work and live here, which will help build a pipeline for our future business community leadership.” 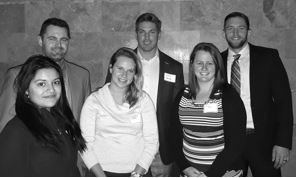 Young Business Leaders at a recent meeting and mixer

Let’s remove at least some of the politics from democracy

Fear often drives bad decisions. Democratic House Speaker Mike Madigan’s recent decision to challenge in court the Independent Maps initiative is a case in point. Ironically, Speaker Madigan and Senate President John Cullerton, a fellow Democrat, fear that establishing a truly democratic process for drawing the State’s legislative maps will hurt their chances of electing lots of Democrats. The legislative leaders of the current party in power, Democrats, draw the maps to expand their election reach. In previous years, Republicans used that same power to skew the maps to favor Republicans. That’s exactly why a proposed plan for an unbiased independent mapping process is so important for Illinois.

The current system of power party mapping ensures the continuation of uncompromising battles between parties that disrupt our legislative decision making in Illinois. This biased mapping process has contributed to the current refusal of Democrats to work with Republicans, which includes refusing to work with Republican Governor Bruce Rauner. Thanks to the current biased mapping system, instead of working together to solve our State’s problems, the party in power focuses on working in these skewed districts to build more votes before the next election, so that they won’t be forced to work with the other party to make compromises. The new Independent Map Amendment is a great start to ending these stand offs that have become our State legislature’s mode of operation.

In February, President Barack Obama summarized the need for independent mapping better than anyone, saying, “In America, politicians should not pick their voters; voters should pick their politicians.” We couldn’t agree more.

Want to help make this happen and help fix our State? Click here.

Is this what it looks like when lawmakers, labor unions, community advocates, and local energy businesses work together? What a beautiful thing!

Have you ever tried to get diverse groups to work together and come to agreement on something that works for everyone? If so, you know how difficult this can be.

So it’s great news to hear that ComEd, church groups, labor unions and many other dedicated individuals and organizations have been working together over the past year to create compromise legislation that will benefit our State and citizens in the years to come.

The Next Generation Energy Plan, SB 1585, has strong bipartisan, labor, and community support. Its organizers believe that the bill will drive Illinois’ clean energy future while saving and creating jobs and strengthening the State’s economy. The bill grew out of discussions between Exelon Generation, ComEd, the Clean Jobs Coalition, and other stakeholders in the year since all three entities supported separate energy legislation in Springfield in early 2015. The bill contains significant parts of all three original bills, as well as new elements reflecting concerns and objectives expressed by these stakeholders and others that emerged in the course of more than eight months of ongoing discussions.

One key new element in the Next Generation Energy Plan is the shift to a Zero Emission Standard – a targeted and innovative solution that is focused specifically on at-risk nuclear plants. The Zero Emission Standard addresses stakeholder concerns by requiring full review of plants’ costs by State regulators and by ensuring that only those plants that can demonstrate that revenues are insufficient to cover their costs and operating risk will be entitled to receive compensation. Other key new elements include a near doubling of energy efficiency programs in northern Illinois, $140 million in new funding for solar development, and a new solar rebate to incent solar generation in a smarter way than current policies.

The Next Generation Energy Plan includes provisions that:
• Nearly double energy efficiency programs, creating $4.1 billion in energy savings, or the equivalent of taking 18 million cars off the road
• Commit $1 billion of funding for low-income assistance, mostly through energy efficiency
• Jumpstart solar energy in Illinois with rebates and more than $140 million per year in new funding for solar development
• Strengthen and expand the Renewable Portfolio Standards to provide stable, predictable funding for renewable development
• Introduce a Zero Emission Standard that will make Illinois one of the first States to recognize the zero-carbon benefits of nuclear power. By keeping the State’s at-risk, zero-carbon nuclear facilities operating, the Zero Emission Standard creates economic and environmental benefits outweighing its costs by a factor of 8 to 1. The Zero Emission Standard:
1. Saves 4,200 jobs in Illinois
2. Prevents large increases in electric rates
3. Preserves over $1.2 billion in economic activity annually o Prevents a dramatic increase in carbon emissions
4. Reduce the fixed customer charge for energy delivery by 50% and create more equitable rates, giving customers more control over their bills
5. Create thousands of new clean energy jobs through energy efficiency programs, energy innovation, and renewable energy
6. Enhance the reliability and security of the power grid

“I support this legislation because of its $1B in programs for low-income communities and provisions to jumpstart solar and green jobs in a smart, sustainable way in our State. At a time when social services are at risk, helping Illinois residents with their energy bills is important than ever,” said Reverend Walter Turner, Pastor, New Spiritual Light, a Baptist missionary church.

“Thousands of people across Illinois are gainfully employed at our State’s six nuclear energy facilities, but those jobs are at risk,” said Dean Apple, President, International Brotherhood of Electrical Workers Local 15. “While also providing for new clean jobs through energy efficiency and new funding for solar, this legislation would rescue our struggling nuclear plants from being shut down and protect the jobs and other economic benefits that they generate for Illinois, including the large role they have played in Illinois holding the national record for the lowest percentage increase in electricity rates since 1997.”

“I don’t want Illinois electricity prices to go up and I want to see Illinois build upon our clean energy leadership. I’m backing the Next Generation Energy Plan because it will provide opportunities for consumers to save on their energy bills, protect and create good-paying jobs, and boost our economy,” said Senator Donne Trotter. “It also will deliver a cleaner, greener and more secure energy future for Illinois while providing significant funding for struggling families and ensuring the continued operation of our nuclear fleet.”

“We’ve listened and responded to key environmental and consumer advocates to develop comprehensive legislation that incorporates policy solutions that will benefit all of our customers, while creating innovative pathways to a sustainable future,” said Fidel Marquez, senior vice president, government and external affairs, ComEd. “This plan delivers significant energy efficiency, a major expansion of solar power, a more secure grid, and important programs for our most vulnerable customers and communities.”

The group estimates that SB 1585 will have a modest impact of 25 cents per month on the average ComEd residential customer bill, while providing for the economic, environmental, and societal impacts detailed above.